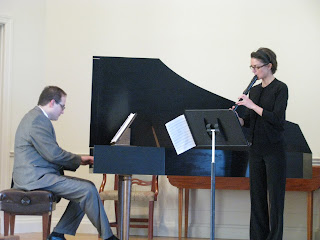 This is a pitifully late review of a concert I went to last April that was just exquisite.

Héloïse and Paul were charming, polished, musically profound and technically brilliant. I took a few photos of them that came out better than I expected. Sadly I have since lost the program which listed the pieces they played, and too much has happened in the interim, but my attention was riveted by the entire performance, which tells me they performed technically difficult as well as musically satisfying pieces. I am not a snob but I do get bored. :-)

I am so thrilled to have music of this caliber available in this area, so I wanted to mention this concert series because it deserves support in the local community to keep it alive, not to mention you get to hear some fantastic performers without schlepping into Boston.

Announcement for the concert

Héloïse and Paul have been performing together in the Boston and Newport areas since 2007. Their 2009 concert for the Boston Early Music festival won them praise in the American Recorder Society and the classical music blog Soho the Dog.

Héloïse has worked extensively as both a recorder performer and teacher throughout Europe and the United States. She has performed with leading period ensembles, including the Boston Early Music Festival Opera, Newport Baroque, Harmonious Blacksmith, the Dunya Ensemble and L’Academic. She teaches with the Boston Recorder society, Recorder Guild of New York, Pinewoods and others. She has a Masters in Music from the Utrecht Conservatory in the Netherlands, and is an Alexander Technique graduate.

Paul has recently performed at St. Thomas Church Fifth Avenue, Yale University, Harvard University, MIT, the Kingston Chamber Music festival, and in Chicago. He was hailed by critics for his performance and direction of Handel’s Alcina for the Boston Opera Collaborative. His undergraduate work was done at DePaul University, and he received the doctor of Musical Arts degree from Yale University. His musicological articles have appeared in American and European journals, including Early Music and Ad Parnassum. Read more about Paul at www.paulcienniwa.blogspot.com.

Posted by Kiirja Paananen at 7:33 AM